This spirit is a master of all stringed instruments. The music he plays is not only beautiful but also has a special power. He cannot abide interruption, so make sure you listen attentively when he begins to play. He uses his beautiful music to thank those who show him respect. 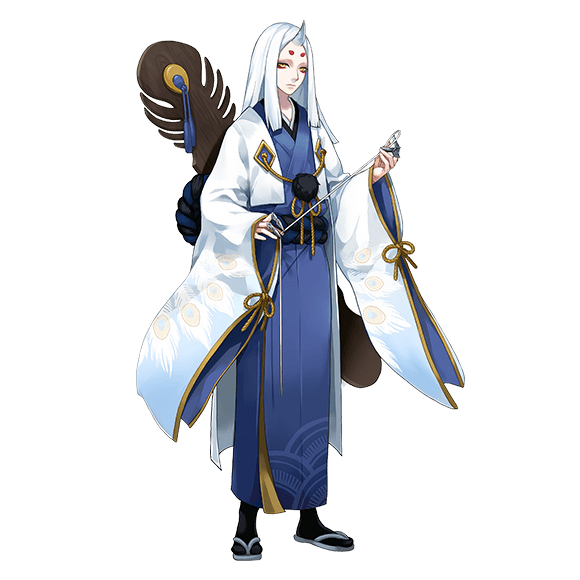 Maestro uses his zither as a bow to shoot an arrow of sound at an enemy, dealing damage equal to 100% of his ATK.

Maestro's music reverberates through the battlefield, allowing 1 ally to take 1 action immediately and increases the SPD of all allies by 8.

Maestro pours his heart and soul into his performance as he plays a madding tune, dealing damage equal to 85% of his ATK to all enemies. Also grants a 20% chance of clearing the enemies' Move Bar.

Maestro pours his heart and soul into his performance as he plays a madding tune, dealing damage equal to 85% of his ATK to all enemies. Also grants a 20% chance of clearing the enemies' Move Bar and a 20% (+Effect HIT) chance of inflicting Confuse on the targets. 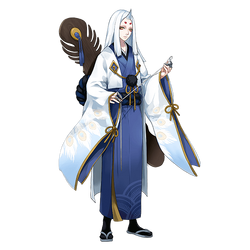 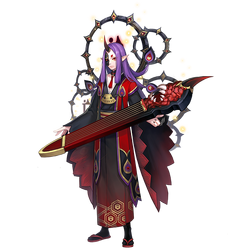 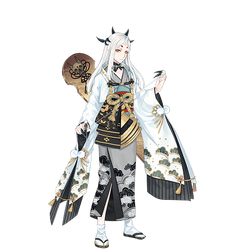 You're really annoying, you know that? Why do you want to hear me play so badly? How could a creature like you possibly understand my music?
You're just a noisy little bug! Fine. It seems I have no choice. Very well! I shall play once, and only once. You just sit there and listen. Quietly. If you make any noise, I will stop playing immediately.

Even your mere presence disturbs my performance. I will not play anymore. Now take those six legs of yours and scurry away.
Ah! Bug by name, bug by nature...
You want to make me change my mind? So what are you going to do? You're just a puny little insect!
That's all you are. A helpless, puny bug. Sigh. I suppose ignoring you would be tantamount to animal cruelty.

Yōkinshi is a young man with long white hair fashioned in a hime-cut style and parted over the horn on his forehead. He has a round face and yellow eyes with light brown shadows and red eyeliner, along with two red dots on his forehead in place of his eyebrows. He dons a blue kimono with a lighter blue wave pattern at the hem and gold lining, fastened by a large black-and-blue rope tied into a knot at his back. He wears a long white haori over his kimono, which is slitted at the back to permit the large rope knot, has a peacock motif, gold trimmings and bows at the sleeves, kept close by a gold haori-himo decorated with a furry black ball. He also wears black socks and grey zōri sandals. He carries a koto decorated with blue tassels which he uses as his weapon.

Not much is known about Yōkinshi's personality besides the fact that he's skilled at playing the koto, is somewhat arrogant and gets annoyed when he's interrupted mid-recital.

Retrieved from "https://onmyoji.fandom.com/wiki/Youkinshi?oldid=36993"
Community content is available under CC-BY-SA unless otherwise noted.