This cute rabbit spirit uses her appearance to her advantage. She usually sits on a magical frog, which she likes to tease. Because she is so cute she knows she can get away with anything. Be careful not to let her make fun of you! Though it's hard to stay mad at something so cute. 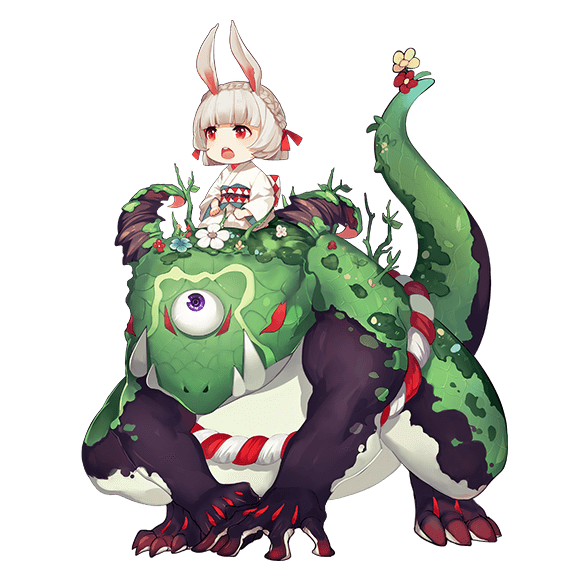 Yama Usagi rides her giant frog up to a single target and attacks them with a paper fan dealing damage equal to 100% of her attack.

Yama Usagi dances to motivate her allies, increasing their move bar by 30% and grants all allies Bunny Dance for 2 turns.

Buff, State: Attack is increased by 10%.

Yama Usagi throws a ring at a single target dealing damage equal to 237% of her attack, and has a 10% base chance of inflicting them with Morph.

|condition3 = Team Yama Usagi with another Onmyouji's [[Mouba and clear any instance 10 times. 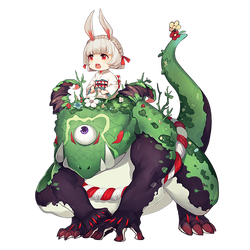 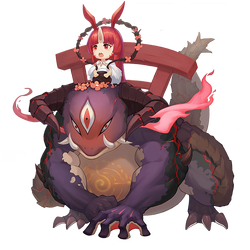 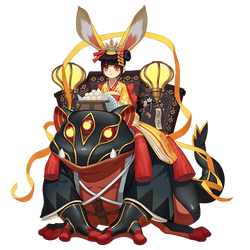 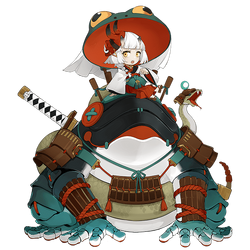 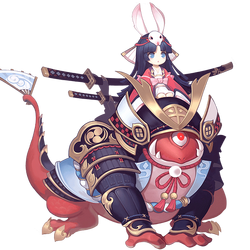 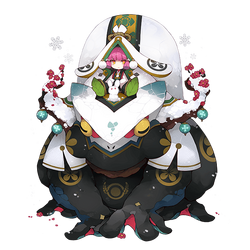 I really can't stand her. She obviously doesn't know where she's going, and yet she points me here, there and everywhere all day long. Not only does she sit on my head, but she also pulls at the grass that grows there… Ouch! That hurts! Sigh… She’s always shouting weird things. No one knows what she's talking about! That little brat! She's always picking on me! The first time we met, she kicked me. Right in the eye. Her little foot almost blinded me!

I wonder how someone so small can have such strength… Hey! Little rabbit! You’re going in the wrong direction again!
Then she said, “I’m sorry, I’m sorry,” and climbed onto me…
Yup! That’s right. I know! She just climbed straight onto my head! Didn’t ask, just went for it. Sigh… If I don’t talk to her, she pulls my grass and my tail. And if I tell her to go, she says she wants to stay by my side. To take care of me! If I don’t watch over her, Heaven only knows where she’ll end up!

This - this little brat will be the death of me… If she angers Lady Enma from the Underworld, I won’t be able to save her then. If you see an adorable, fluffy little white bunny by the side of the road, for your sake, please stay well away! Mister frog! Wake up! Come on, wake up! Attack! Attack!

Strengths
Many ways to get an R Shikigami, hence it does not take much effort to get Yamausagi. Her supporting capability is pretty powerful as her thruster skill can increase her teammates' opportunities to act, and relieve them of the pressure of having to carry their own SPD souls.
Weaknesses
Her attack skill (3 orbs) barely scratches the surface, and her initial SPD of 115 is still relatively slow.
Recommendation
Highly recommended. A must-have for everybody.
Application
She is indispensable in the Soul Zone, with very impressive performance in other PvE and duel battles as well.
Features
With just two orbs, she can thrust her teammates' Move Bar even if her skill has not been leveled up. She may seem like an inferior replacement for Kamaitachi but the quality of her thruster skill is as good as what Kamaitachi can offer. A dual thruster lineup that includes both Yamausagi and Kamaitachi can support their team very well in PvE and PvP battles.

Be Nice
A normal attack with a slightly higher skill coefficient.
Bunny Dance (2 Orbs)
One of the only two Shikigami in Onmyoji with the team thruster skill. Compared to the three orbs that Kamaitachi's thruster skill requires, her lower orb consumption is an undoubted strength. Kamaitachi also boosts the team ATK by 25% and Effect RES by 20% while Yamausagi only boosts ATK by 20%. Note that the effect of thrusters' increasing ATK skills cannot be stacked onto other skills like Seimei's Star Spell. Yamausagi may lack Kamaitachi's passive ability to support attacks, but she requires only two orbs and the ease of leveling up her skill stats make Yamausagi one of the most preferred Shikigami in early stages of the game.
Although many players seem to replace Yamausagi with Kamaitachi, or even select two Kamaitachis as their main thrusters for duels, Yamausagi still diligently performs her duties because of her advantage in orb consumption in PvE like the Soul Zone.
Ring Toss
This relatively weak skill is rarely used, and most of players hardly see this in action. Its control effect is only 10% which makes it challenging to restrain the opponent effectively. As the chance is too low, it is not recommended.

As a supporting Shikigami like Yamausagi, a soul set selection that can help her support the team better will be more ideal.

(Important note: The list here only looks at Shikigami who can provide powerful support. For the specific lineup, you should examine your opponent's lineup and the situation before you make any decision on which Shikigami to field.)

A great help for twin thrusters. They complement each other and work together to effectively obliterate the opponent's opportunities to act.

With more opportunities to act when placed in a lineup with twin thrusters, Samurai X can continuously use his skill to haunt the enemies.

Shishio
Owing to Shishio's own passive effects, the frequent appearances brought on by twin thrusters cannot be sustained as long as Shishio is present. His ultimate act is to disrupt the rhythm in the enemy's lineup using multiple interjections.
Sea Sprite Shikigami
The focus of any lineup with twin thrusters like Yamausagi is to gain the upper hand and deliver the first blow. However, if the first turn is affected by Sea Sprite's protection to depress the HP damage, then the opponent's team can survive better.

Thrust support is key in a game like Onmyoji. Naturally, as one of the thruster Shikigami which is not hard to obtain, Yamausagi could promote her team during the early stages of the game. Her thrust support is a simple and efficient assistance. Even when she is replaced by Kamaitachi in later stages, as a thruster Shikigami, she is still a regular team member in PvE and PvP battles. So at the beginning, players should not just promote the main output and healing Shikigami, but also need to spend some effort in promoting a powerful thrust support for battles. Yamausagi will be a great help in all different kinds of battles.

Retrieved from "https://onmyoji.fandom.com/wiki/Yama_Usagi?oldid=36890"
Community content is available under CC-BY-SA unless otherwise noted.