She looks like a harmless young girl, carry a straw doll in one hand and a mallet in the other. her radiant smile is captivating and she has a young, innocent face. But be warned, if she gets hold of you, the things she'll do will make your blood run cold. Her ability with curses coupled with her thirst for death makes her truly terrifying. No one knows what happened to make her like this, but the only advice they can give is to stay far, far away. 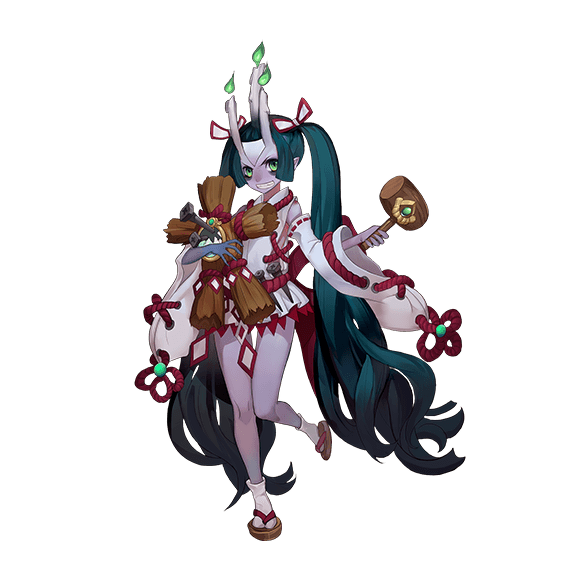 Ushi no Toki hammers a nail into her straw doll to doerm a magic field and shoot a cursed dart at 1 enemy, dealing damage equal to 100% of her ATK.

At the end of a move, Ushi no Toki has a 20% chance of casting cursed fire on 1 random enemy. This increases the damage it takes by 5%.

Summons a giant straw doll that connects to the soul of 1 enemy. After the connection is established, all the damage inflicted on the straw doll is transferred to the enemy. The straw doll's HP and DEF are 80% and 10% of the enemy's DEF and HP, respectively.

Summons a giant straw doll that connects to the soul of 1 enemy. After the connection is established, all the damage inflicted on the straw doll is transferred to the enemy. The straw doll's HP and DEF are 50% and 10% of the enemy's DEF and HP, respectively. 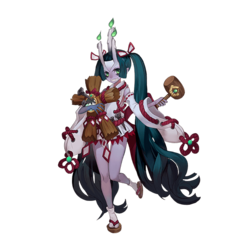 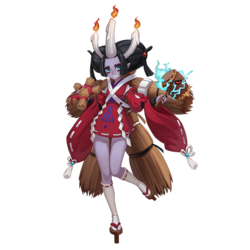 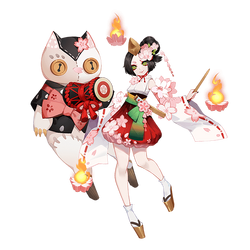 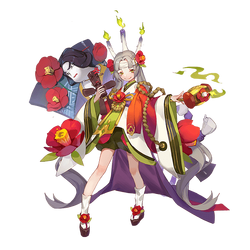 I'd never encountered anything like her before. And I hope to never again. I'll never forget her. On one moonlit night I was walking home. Suddenly, a scream pierced the still night air. Was someone being robbed? Did they need my help? I ran towards the noise. Wait - No! It wasn't a thief! It was her!
Her skin gleamed eerily in the moonlight. I stood frozen, horrified. A crown of burning candles rested on her head, molten wax running down her face. She cackled, maniacally. There was something - wrong about her smile. There was a hammer in her hand. Clink! Clang! Clink! Clang!

I tried to move, tried to run - but I couldn’t!
Her laughter made my hair stand on end, sent sweat running down my spine. But who was screaming? She was silent, grinning, manic. I tried to get a closer look and then wished I hadn’t. In front of her was a straw doll, contorted and crushed by the nails she’d hammered into it. Opposite her, a man lay paralyzed in the road. I say “a man”, but he was contorted so much that he was barely recognizable as human. His back was arched and his limbs were contorted into odd, inhuman angles. The creature rolled and writhed, mirroring the movements of the doll in the lunatic’s hand. His eyes were rolled back into his head in agony. There was a moment of silence, of stillness.
Then liquid began to gush from his body. She stood still, the same insane grin on her face, a wild look in her eyes.
And then - oh god, oh god… She turned her face, caught sight of me! I felt my legs start to give way but I forced them into action. I had to run! I could hear her footsteps behind me. She drew closer - I ran!

I ran for my life, but she caught up with me! No! No, please! Please! Let me go! Please, let me go!
I couldn’t move. She approached, her face coming close to mine. I could see my own eyes reflected in her green pupils, my face looked in a terrified stare.
“Shh…” She raised a finger to her lips.
I promised her that I would never ever tell anyone. That I’d keep her secret.

Retrieved from "https://onmyoji.fandom.com/wiki/Ushi_no_Toki?oldid=36885"
Community content is available under CC-BY-SA unless otherwise noted.