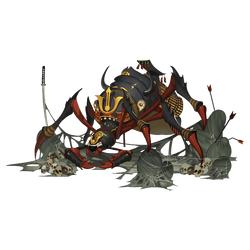 Once Tsuchigumo is discovered, there will be 3-5 minutes of gathering for everyone to prepare for battle, as after it begins, no one new can join. There is a minimum of 50 and a maximum of 300 people per boss. The difficulty of the battle is matched with the number of people participating, and low-level players will not increase the difficulty. The boss stays for 20 minutes and escapes after that if players fail to defeat it.

There are 2 stages to the boss battle itself.

Tsuchigumo's limbs must be attacked to weaken it.

Deals damage equal to 10% of Tsuchigumo's attack at the start of the target's turn.

Tsuchigumo casts a spider web at all enemies dealing damage equal to 85% of its attack, inflicts poison and decreases

Deals damage equal to 10% of Tsuchigumo's attack at the start of the target's turn.

Tsuchigumo has a chance to summon spiderlings for help when its body or body parts are damaged.

Attack is increased by 8%.