The unfathomable great youkai Tamamo no Mae,
possessing incomparable beauty and formidable demonic power.
Has a deep friendship with Kuzunoha who is also a fox demon,
they seemed to have made some kind of agreement.
Although frequently appearing in the form of a elaborately dressed woman,
the true appearance is not actually so. 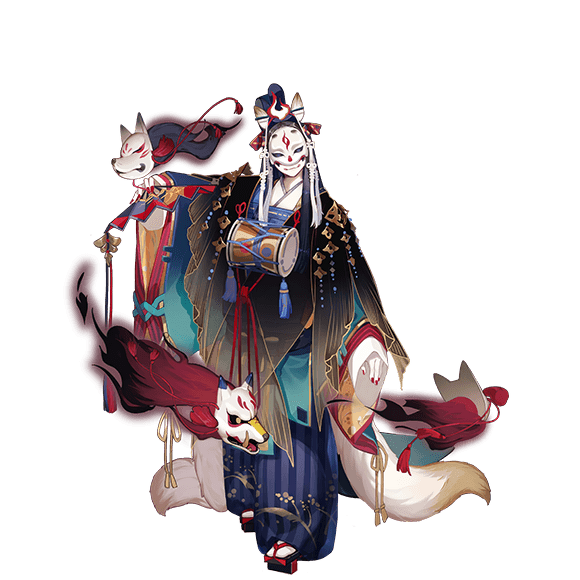 In this world, everyone has their secrets.

Uses spirit energy to attack 1 enemy, dealing damage to 100% of his ATK with a 10% Base Chance (+Effect HIT) of inflicting Confuse lasting 1 turn on them.

I have to punish you!

Focuses Fox Fire to attack 1 enemy, dealing damage equal to 263% of his ATK. His damage is reduced by 15% on targets with more than 80% HP.

Channels all of his power, dealing damage to all enemies equal to 131% of his ATK. His damage is reduced by 15% on targets with less than 50% HP. 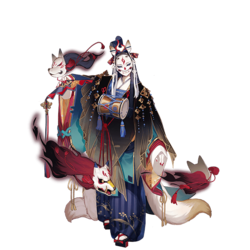 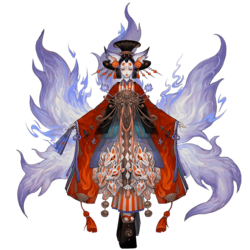 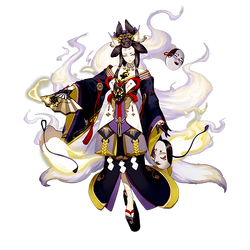 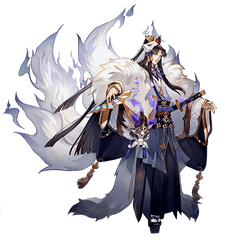 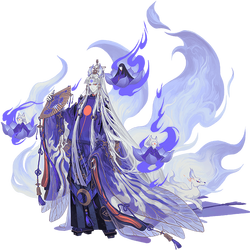 Dear Kuzunoha,
How are you?
This is a hard letter to write, I don't really know where to begin. I guess I'll just write down what's on my mind. I hope you don't mind.
Kuzunoha, I saw your son the other day. Everyone in the court is talking about him. I wanted to meet him for you. After all, I promised to look after him. But he's so naive. He's taken the responsibility of protecting the capital upon himself and I'm sure he'll see me as his enemy. I think this must be the destiny you told me about.

An important figure has been attending the court lately. When we met, he asked me why I was dressed like woman. Looks like my beauty can’t fool everyone.
Your boy looks just like you. I’m so happy about that, Kuzunoha. I don’t want to pretend to be someone else when I meet him. I'll meet him as my true self.
Seeing him will be like seeing you again.

Kuzunoha, please forgive me. I have to trouble your boy with a dilemma. Frankly, even I'm not sure if there's a right or wrong choice or whether it's merely about finding the lesser of two evils. But if he's truly your boy, I'm sure he'll make a choice that will satisfy me. You've always been proud of him. And I've always been proud of you, Kuzunoha.
The destiny you told me of, I want to conquer it, even if it's just once. Pray for me, Kuzunoha.

Unlocks the skill-casting effect Blasting Tails.
I've been taking advantage of this beautiful face I have while living in the court, and I've learned quite a few interesting facts. One that particularly caught my attention was the conspicuous act of the onmyoji from the Minamoto clan, who had been feeding a giant monster in the forbidden area belonging to the Minamoto clan. I once reached the field in that forbidden area and saw the monster with my own eyes. It was coiled upon a tower, and at its base were piles of dead bodies, the remains of maidens that had been sacrificed as offerings. The whole place reeked of a nether force. A sight of absolute disgust.
There was also another thing that caught my attention... That master who came to the court a few days ago — the one who asked me why I was dressed like a woman — seems to know everything. I believe he also knows of the unusual acts of the Minamoto clan, yet he never questions them. I wonder if he's playing dumb on purpose. Which makes this even more interesting. There must be a particular reason behind this. Kuzunoha, it's truly like you said before. In this city of cherry blossoms, everything is tangled in a huge web...

Chiyo, Yuto, Aika... I just had a dream. A dreadful dream. In my dream, you left one by one, leaving me alone in a desolate world. I know parting is inevitable in the mortal world. But I never thought we wouldn't even be able to spend the short span of a human life together. I always pictured one thing in my mind. Decades later, I would be holding Chiyo's hand, welcoming Yuto and Aika home. They would happily tell me all the interesting things they saw in the mortal world and all the pain and happiness they experienced, and we would listen quietly.
Oh, really? Is it my time to return already? Return to that sad nightmare? If only this place was reality. I'd rather stay here a little longer. Chiyo, Yuto, and Aika, I miss you so much. Wherever and whenever you are, my heart longs for this place and longs to return to you.
My wife and children...
How I wish I could show you the future I saw, the one I expected.

Awakening of the Master Trailer

Kuzunoha, due to your child.
We were able to experience another world.

Retrieved from "https://onmyoji.fandom.com/wiki/Tamamo_no_Mae?oldid=36932"
Community content is available under CC-BY-SA unless otherwise noted.