A brilliant onmyoji who is highly renowned in Kyoto. For reasons unknown, he has lost his memory. Will his memories reveal long-lost joys? Or a horrific truth that he cannot bear to remember? 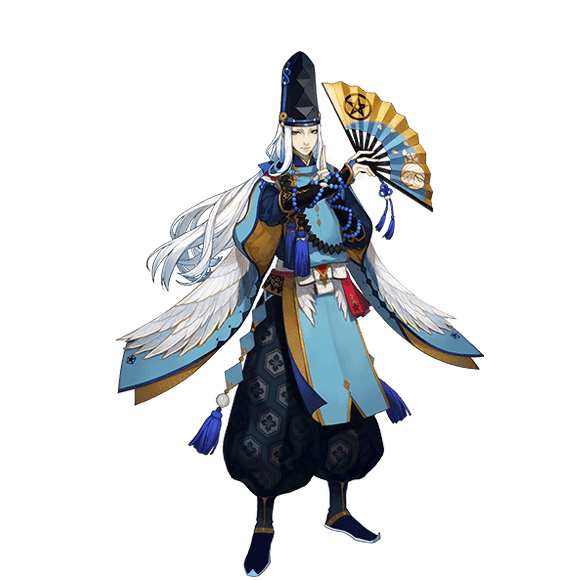 Uses an amulet to attack a single target, dealing damage equal to 100% of Seimei's attack.

Debuff, State: Damage dealt by the target is decreased by 20%, lasts 2 turns.

Bind a target with a kekkai. This increases their

received damage by 10%. Also has a 50% base chance of inflicting Bind. The bound enemy can use normal attacks to break the bind. The kekkai inherits 5% of Seimei's HP.

Forms a large defensive shield so enemies cannot damage allies. The shield breaks when Seimei takes 2 actions or it absorbs 10% of his max HP.

Explodes all amulets on the field and eliminates their effects. Each amulet an ally has restores their HP by 10%. Each amulet an enemy has deals damage equal to 10% of Seimei's attack.

Inflicts Amulet: Death on all enemies. It increases their received damage by 15%. Lasts for 2 turns.

Damage received is increased by 15%.

Grants all allies Amulet: Life, excludes Seimei. It reduces their received damage by 15%. Lasts for 2 turns.

Damage received is decreased by 15%.

When Seimei receives an attack, there is a 10% chance to summon Shinryu. Shinryu invokes lightning to attack all enemies, dealing damage equal to 100% of Seimei's attack.

Forms a pentagram that increases

damage dealt for all allies by 15%. Lasts for 2 turns. 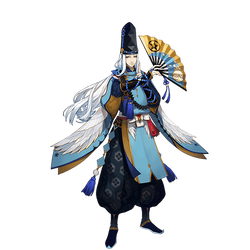 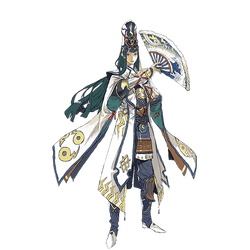 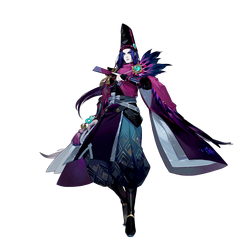 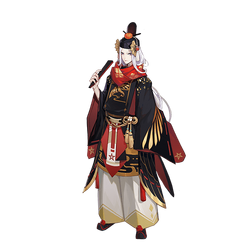 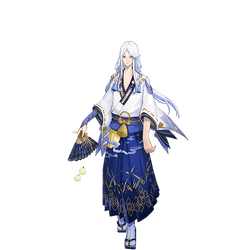 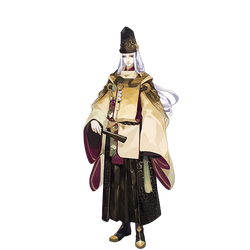 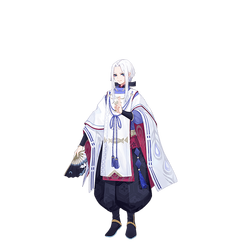 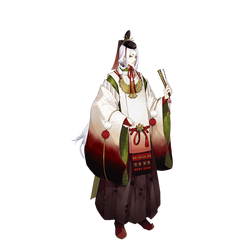 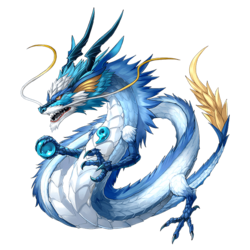 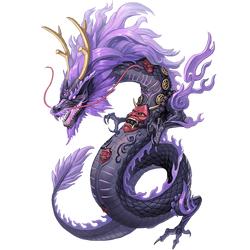 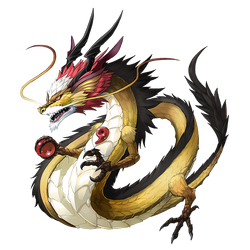 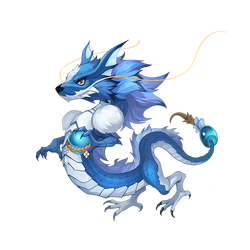 Abe no Seimei (安倍晴明) is the protagonist of Onmyōji and the first playable character acquired. As a practitioner of onmyōdō, he is in charge of keeping yōkai in line so as not to cause troubles to humans. Having lost his memory prior to the start of the plotline, he takes in Kagura as his charge and befriends Yaobikuni and Minamoto no Hiromasa. Until chapter 18, Seimei is only the Yang half of the original Abe no Seimei whereas his enemy Kuro Seimei is the Yin half.

A calm and stoic man, he never shows extreme emotions despite caring deeply about his loved ones as well as the people of Heian-kyō. As seen in chapter 8: 桜と桃 (Sakura to Momo) and chapter 11: 紅に染まる楓 (Kurenai ni Somaru Kaede), he is also willing to take responsibility for other people's problems even though he does not cause them himself, and always responds calmly to being wrongfully accused. Being amnesiac, he desires to find out about his true self and past actions, and is extremely concerned about whether he has committed any wrongdoings in his past.

Seimei is a handsome human man with long white hair tied into a loose ponytail using a blue ribbon. He has blue eyes which Sakura-no-sei describes as "fox-like" and seems to wear red eyeliner. In his default skin, he wears a light blue sokutai with golden and dark blue trimmings and crane wing motifs at the sleeves along with a large tasseled chain of beads over one shoulder, and a white belt with two tasseled chains of rectangular ornaments hanging from either side and red talismans tucked into it. He sports a pair of fingerless gloves with blue beads wrapped around each, a pair of patterned dark turquoise trousers and dark blue boots. He also wears a tall hat. He is always seen holding a folding fan bearing the pentagram symbol which he also uses in his spells.

In his second skin, Seimei's hair is changed from white to green and his outfit consists of an armor and a white coat with blue trimmings and yellow motifs. His gloves are changed into metal ones and his boots have white feet and a pair of knee guards. His hat is also changed into white with blue and red decorations, and his fan's pattern an image of sea waves and the pentagram symbol absent. In his third skin, he looks exactly like Kuro Seimei. In his fourth skin, Seimei's hair is changed back to white, but his eyes are lavender, his oufit a black sokutai with red and golden motifs, white trousers with yellow patterns and black boots with red trimmings and furry red balls. He wears a red scarf with yellow diamond motifs and a black kanmuri hat with two small yellow paper fans on either side and an orange on top. His fan is changed to red.

He is based on the real-life historical figure Abe no Seimei, who was also a renowned onmyōji.

Basic Skill is Seimei's normal attack skill. It is fixed on the skill bar and cannot be swapped. At its maximum, it can cause damage equivalent to 140% of ATK, with a 100% probability of slapping the debuff, Amulet: Confuse, on the enemy, which reduces damage caused by the target by as much as 40% for 2 turns. This skill is suitable for PvP battles, where it selectively targets and launches the skill at the enemy's main output Shikigami.

Spell: Bind is a single target control skill. When the skill is at its peak, its target will receive 40% more damage, and the probability of binding the target enemy becomes 50%. When bound, the enemy needs to use the normal attack to remove the control effect. In PvP, this serves two main purposes. One is to control and prevent the opponent's key Shikigami from launching their main skills. Another is to lower the DEF of the target so that high output Shikigami can inflict the largest damage possible on the target. This skill has a 2-turn cooldown.

When Spell: Protect is launched, it will form the Realm, a barrier that protects his teammates from the enemy. At the pinnacle of this skill, the barrier loses its effect only after 2 turns by the Onmyoji or when it has suffered a damage equivalent to 14% of the Onmyoji's maximum HP. This skill’s cooldown is 3 turns. The Realm is a skill that perfectly offsets damage from single-stage single attacks, multi-stage single attacks and multi-stage group attacks. If the enemy wants to attack Seimei after Spell: Protect has been released, they need to break the protection barrier. On top of that, Seimei's team will not be affected by any damage that may overflow from the attack that breaks the barrier.

Spell: Purge will detonate all the spells in the battlefield and remove their effects. The spells on every teammate will be converted to recover their respective HP by 10%, while the spells on every enemy will become damage equivalent to 10% of Seimei's ATK. This skill is not very useful, and is not recommended.

Amulet: Death increases the damage inflicted on the target by 30%. The effect only disappears after the target moves 3 times (at skill's maximum). This skill has no cooldown. Together with Spell: Star, this can effectively increase the impact of the damage. It can also be used as a preset debuff for some Shikigami combos.

When the skill is fully leveled up, Amulet: Life can reduce the damage suffered by teammates by 30% for 3 turns. This skill has no cooldown. As a skill that protects the entire team, this is mainly used to reduce the damage suffered by the team in PvE battles. Divine Lightning is a passive skill. At the skill's maximum, when Seimei is attacked, there is a 10% chance that he will summon Shinryu to attack all enemies with a damage equivalent to 120% of Seimei's ATK, and a 20% probability to daze the enemy for 1 turn. In battles, Seimei has a chance to daze the enemy's key opponent when this is triggered during an attack to seize the opportunity to build the conditions for his team to counterattack.

Spell: Star increases damage inflicted by the whole team by 30% for 3 turns (at skill's maximum). There is no cooldown for this skill. A very practical skill in PvP and PvE battles for increasing the damage quotient.

For PvE and PvP, Spell: Star is a pretty good option.

As the Boss can be immune to negative effects, Spell: Bind is not recommended for PvE battles. Instead it is more suitable for PvP scenarios.

When Seimei carries Spell: Protect to attack a Boss, it is important to carefully observe the Boss's Move Bar, and get ready to place the Realm.

If the output is slower, Amulet: Life is recommended when you want to fight back and recover HP.

In PvE zones, the recommended skill combination is Spell: Protect plus Spell: Star.

In PvP battles, Seimei should carry the skills, Spell: Protect and Spell: Bind.