The fearless Ibaraki Doji was tainted by the blood of a demon during a fight.

His right arm was turned into an uncontrollable demonic arm that seeks to devour him. An onmyoji from afar helped to put a seal on the demonic arm, but only for the moment.

Ibaraki Doji must become stronger to become the true master of his demonic arm. 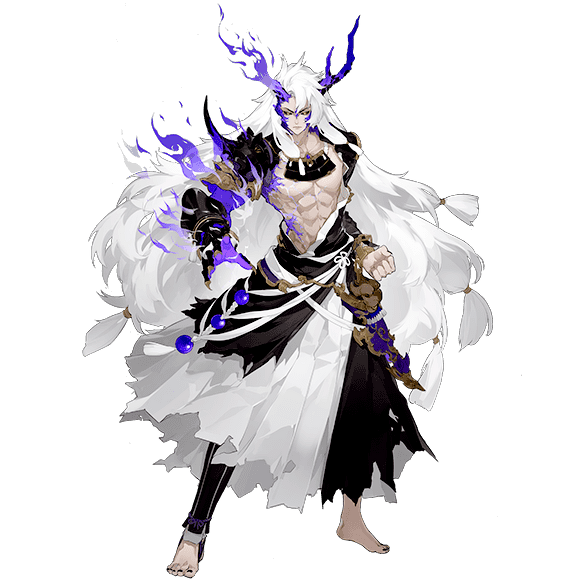 Tremble before my will to battle!

When the ghastly flames of Gates of Purgatory attacks more than 1 enemy, each additional enemy increases the damage of the Demonic Flames by 10% to a max of 20%.

Inciting powerful yori, the Gates of Purgatory are opened, calling on the Demonic Flames that spilled out to attack all enemies, dealing damage equal to 131% of SP Ibaraki Doji's attack, then summons a Demon Hand to crush a single target, dealing damage equal to 131% of his attack.
If the target is KO'd by the Demonic Flames, the Demon Hand will attack the enemy with highest HP. 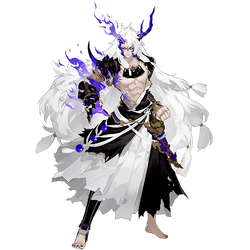 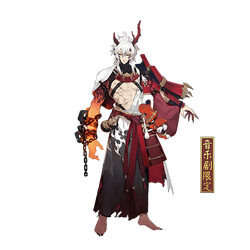 That white dress...Was that an onmyoji? An onmyoji in this part of the mountain and alone by himself? Did he not know that the demonic Ibaraki Doji lives here?
“Hey!”
“Are you…”, the onmyoji responded calmly to my greeting, “You must be Ibaraki Doji. I can tell by that demonic arm of yours.”
“Humph, that’s right, I am.”
“May I ask if you’ve seen a fox lady pass by here?” The onmyoji was not afraid of me, and talked in a completely natural voice. “She’s with a child. They both have distinctive silver hair.”
“No. There’s no such woman on my mountain.” I started to get anxious. “Onmyoji!” I cried. “Does my name not make you tremble in fear?”
The onmyoji just smiled and said, “It would if I was weaker I guess.”
“What?!” Just as I was about to launch my attack, I felt an extreme pain. It was as if a fire was burning inside me.
“That demonic arm of yours…” The onmyoji stared at me with his half-closed eyes. “It’s breaking you down, isn’t it?”

The onmyoji was right.
The demonic arm of mine was becoming increasingly uncontrollable recently. Sometimes I felt like I was being controlled by the arm. It often killed everyone around me before I even realized it.
“You have two options. One is to cut that arm off… And the other is to become stronger than the demonic arm, and so avoid being devoured by it. The pursuit of power does not make you able to contain it. You must learn to achieve mastery over it.”
“Tsk, pretentious onmyoji, how dare you try to lecture me!”
“Onmyoji? No, I’m no longer an onmyoji…” The man’s voice turned quiet all of a sudden. “After all, it’s forbidden to fall in love with a spirit…”
“Tsk, look how complicated you humans are with all the rules you have.” I looked at the downcast man. “Spirits like me can stay loyal to our own desires. No rules can bind me.”
“Haha…” He looked at me and started laughing. “Ah, how I wish I were a spirit.”
“Then you have my permission to live as a spirit upon this mountain.”
“Thank you. But humans and spirits are different. I won’t run away from that fact.”

“Hahaha! What an interesting human.” I looked at the onmyoji, with his calm face, and felt invigorated. “I won’t run away either. Even though this demonic hand of mine has been trying to consume my will recently, I will not yield to it…”
“Haha, you truly are a great spirit, Ibaraki Doji. You’re very different from the lesser ones.” The man reached out and placed a spell on my demonic arm. “I can suppress its power for you for a short time.” He smiled.
“Oi, human. What’s your name?”
“My name is not something worth remembering.” He looked to the moon. “Farewell, Ibaraki Doji, I have an appointment with them…”

"A huge akki inhabits this mountain, it eats everything. Once the sky turns dark, absolutely, do not go up the mountain." The monk's eyes were filled with horror, he looked like a complete wreck.
An akki that eats everything? Heh, I, Ibaraki Doji, don't fear these things.
The monk wasn't lying, under the moonlight, that huge akki crawled out of the cave it hid in, its whole body was bloated like a large insect, and its original form was far from being distinguishable, intense noxious aura seeped out from its skin, becoming stenching waves of odor.
"I am Ibaraki Doji, if you don't want to get hurt, then scram."
That thing's throat emitted gurgles of "Gurr— Gurr—", crawling towards me.
Yori gathered in my right hand, "You want to fight me, yokai? Then prepare yourself!"

The corpse of the akki lay within the trees, akin to a twisted dune, the stench gradually dissipated.
Yet, that congealed indigo blood stuck fast to my fist like a spiderweb, no amount of washing could rid myself of them.
My right hand throbbed like it had been burned...... the pain grew more intense, damn......
There has never been a battle fought with such difficulty, I fainted away from the pain.
Once I awoke, the moonlight was obscured by dark clouds, and the forests a pitch black.
In the darkness, I could hear a voice repeatedly murmuring. I unconsciously stretched out my right hand, but saw that it was now covered in a violet glow, I remembered the traces of that akki's blood.
Those murmurs finally became clear, it said: "Your master needs you."
"Master? Hehe...... I can only have one master, that would be myself."
"Hmph, you demons within the dark...... have a taste of the power of my iron fist!"
I hurled a punch with my right fist toward the direction of the sound, the explosive yori instantly lit up the entire forest......
What appeared before me was a scorching purgatory, onibi flickering across the landscape.
My right hand also turned into a demon hand set aflame...... I could feel it attempting to escape my control.
I must control it, else who knows what might happen.
I decided to stay in these desolate mountains to find a solution. Just like that, I took the place of that man-eating bug, becoming the akki of this mountain.
The akki Ibaraki Doji's name slowly became known, and there were even people that came to join me, I inexplicably became the onio of this mountain.

Retrieved from "https://onmyoji.fandom.com/wiki/Rengoku_Ibaraki_Douji?oldid=32114"
Community content is available under CC-BY-SA unless otherwise noted.