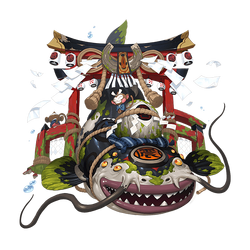 Once Jishin Namazu is discovered, there will be 3-6 minutes of gathering for everyone to prepare for battle, as after it begins, no one new can join. There is a minimum of 50 and a maximum of 300 people per boss. If after the time limit there is under 50 people, the timer will restart with a minimum of 25 people needed. If this is cannot be satisfied, the boss disappears. The difficulty of the battle is matched with the number of people participating, and low-level players will not increase the difficulty. The boss stays for 20 minutes and escapes after that if players fail to defeat it.

There are 3 main stages to the boss battle itself. There is an ally Yokinshi that can be controlled, its skills are slightly different from normal. Throughout, Jishin Namazu can mitigate damage, but the effect is lowered when players die.

Jishin Namazu summons 4 Umibozu, and each Umibozu has a blessing. The blessing held by the first KO'd Umibozu will be granted to a single shikigami during stage 2 and the player's team during stage 3.

This stage repeats after stages 3 and 4.

Jishin Namazu gains damage immunity and summons a monkey, all damage dealt to the monkey is capped at 4000. KO'ing grants a damage buff. This effect grows stronger the faster all players KO it and deal more damage.

After losing 80% of its health, Jishin Namazu swims far to prepare for a counterattack and the Torii appears. If 80%+ of the players participating destroy the Torii, Jishin Namazu's counterattack will fail and deal little damage; otherwise, massive damage is dealt along with inflicting debuffs.

If the Torii is destroyed, multiple rounds of paper dolls appear until the natural time for Jishin Namazu returns.

The buffs conveyed are "burst" and are one of four effects:

Jishin Namazu attacls all enemies dealing damahe equal to 100% of its attack.

Jishin Namazu inflicts an enemy with the Blessing held by a KO'd Umibouzu. The affected enemy gains a strong buff for 2 turns, after which, it is then weakened for 7 turns by

80% reduced defense. A weakened enemy will be KO'd if they are inflicted with the Blessing again.

If a weakened shikigami is revived after being KO'd, their damage received will be greatly increased.

Jishin Namazu has hard skin that can greatly reduce damage. Its skin is reduced by a layer when a player is KO'd.

watches all shikigami, the shikigami that deals the most damage for the next 2 turns will be marked and receive a Blessing.

Jishin Namazu launches a 2-hit attack to all enemies, each hit deals damage equal to 80% of its attack.

Jishin Namazu soars into the sky and slams down into the water, dealing damage equal to 150% of its attack to all enemies and has a 75% chance to inflict daze and confuse, lasts for 2 turns.
Also creates a wave effect,

reducing attack by 30% for all enemies.

Confused targets might use their normal attack to attack a random enemy or ally when they move.

Jishin Namazu fails to soar into the sky, causing it to deal damage equal to 80% of its attack to all enemies.

Gold is given dealing damage to the boss, the higher the damage the more the gold. The secret treasure gives random rewards. The victory rewards are given if at least 30k damage is contributed, and distributed according to the rating. There are team and personal ratings and team uses time while personal uses points:

Team and personal points are added together to get total points.

There are chances of getting from mail:

Glub, glub...... Endless darkness surrounded me, how long was it like this,
maybe a hundred years? Or perhaps a thousand. Staying in this nondescript place for so long,
the initial reason for being here couldn't even be recalled, time made me forget everything,
right, who am I, ah, just thinking about this made me annoyed, want to get out of this darkness,
dark...... chaos...... eh? It seemed like a ray of light shone through the darkness onto my body,
although I couldn't see it, I could feel it, because I felt a long-awaited sense of comfort.
"Don't worry, it'll be alright, peace~ peace~", listening to that gentle voice, I gradually relaxed.

It's been, hmm...... a long time since I left that mire.
At first the house here would break unpredictably,
then a kekkai was installed around the pond and it got better, but I still want to go out,
staying here always makes me worry that I'll be alone again. "Don't worry, as long as you stay in this kekkai,
I won't leave", she would always say, hmm, she probably won't trick me, glub glub...

Glub, glub...... so annoying, want to escape from this darkness...... Ahhhhhh.......
Why am I still so sad after leaving the darkness, still so manic.
"Where did this loach come from, to dare run wild at my jinja, how daring",
no, you're not her, you impostor,
roar! Don't want to think about anything anymore, I'll destroy it all, all that is ugly.

So tired, so much pain...... am I going to die like this......
Sorry, it seems like I won't be waking up again, even moving is so difficult.
"Sorry, I am back", hearing this familiar voice,
I felt tears dropping on my left fin, that long-awaited feeling of comfort spread within my body once again,
like the ray of light on that day, peace, peace......