Momo is a spirit formed from peach blossoms. She is cheerful and kind.
Her closest and dearest friend is Sakura.
Mom witnessed the intensity of Sakura's love and was worried that she would get hurt.
Since Sakura lost her beloved, Momo has lived with her and supported her in her grief.
Anyone would be lucky to have a friend like Momo.
And as for Momo, she is just happy that she can be there to protect Sakura. 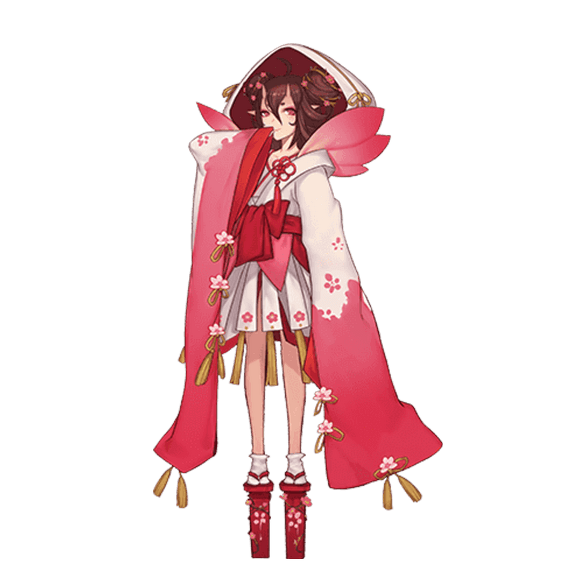 May peach blossoms fill the sky!

Forms a flurry of petals into a flower to attack 1 enemy, dealing damage equal to 100% of Momo's attack.

Gathers the nectar of flowers into a gentle breeze to heal 1 ally, restoring their HP equal to 20% of Momo's max HP, and has a chance of restoring other allies by 30% of the HP restored when launching a critical hit.

Hmph, don't play dead. Get back on your feet!

Revives a KO'd ally and restores their HP by 20% of her max HP. 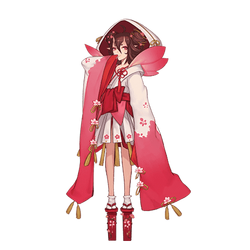 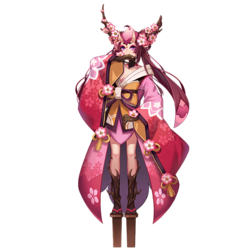 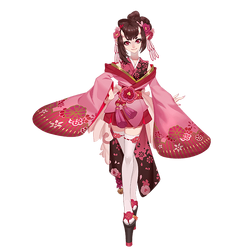 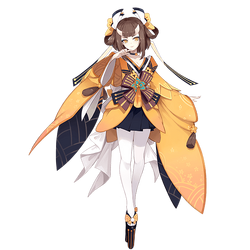 Momo is equipped with two active skills which are essential in two aspects: instant team healing and the resurrection of an individual team member. In general, Momo has the following characteristics:

Strengths
Extremely high defense with incredible group healing and recovery capacity, plus the ability to revive other Shikigami.
Weaknesses
Her basic speed is slower, and control Shikigami are her bane. Her resurrection ability has a CD restriction, and she cannot bring dead Onmyoji back to life.
Recommendation
There are many ways to get this Shikigami, and her stats can be maxed out quickly. She can definitely make an impact in either PvE or PvP.
Application
Good performance in duels, Kirin Hunt, and Secret Zone.
Features
One of the few resurrection Shikigami in the game. In PvE battles, Momo is tremendously useful in ensuring the continual survival of her team. In duels, Momo is an excellent teammate for Shikigami like Vampira. To a certain extent, Momo can hinder Shikigami like Lord Arakawa whose most powerful skill is to instakill a enemy.

Flower Dance
A normal attack with a slightly higher damage quotient.
Healing Fragrance (2 Orbs)
A single + group recovery skill. Crit adds a bonus to her healing ability where the group treatment can be affected with Crit twice.
This skill can trigger soul effects related to healing such as those from Tree Spirit and Pearl. Owing to the mechanism employed in this skill, Momo must stack fully on Crit to support this skill well. Although Kusa has a similar group healing ability, unlike Momo, Kusa's healing skill quotient is related to her ATK which inadvertently limits the extent of her survival ability. Hence, for group healing, Momo is preferred.
Revival Blossom (3 Orbs)
This active resurrection skill is the highlight for Momo. Kagura's Summon: Afterlife is not a true resurrection. Yao Bikuni's resurrection requires the Shikigami to be killed by the opponent before passive resurrection is possible. Likewise, Kyonshi Ani's resurrection coffin requires the Shikigami to be unsuccessfully obliterated by the opponent before resurrection can happen. Only Oguna and Momo have similar active recovery skills. Although both passive and active resurrections have their respective advantages and shortcomings, it is difficult to replace Momo in terms of the features she brings to the battle.

There are many 4-pc sets that Momo can choose from. Each offers its own advantages.

Fortune Cat
Currently, Momo's healing skill requires her to consume more orbs than Ebisu. Hence Fortune Cat is one of the candidates for consideration.
Mirror Lady
Mirror Lady has a damage rebound capability that will make the opponents stop in their tracks when they want to attack Momo, and this helps protect Momo in certain ways. When up against a Shikigami with a high damage AOE, Mirror Lady is often able to produce unexpected results.
Jizo Statue (4-pc set) + HP/Effect RES (2-pc set)
(SPD for slot 2, Effect RES for slot 4, and HP for slot 6)
Momo's very existence is to significantly reduce the effect of single-target DPS Shikigami. If the opponent deploys an AOE output Shikigami, then the shield by Jizo Statue's will offset a large part of the enemy's damage, which makes this one of the most suitable souls for Momo.
Sea Sprite
Sea Sprite can be placed on Momo and still retain the strong shield for opening turns to help the team survive the first turn.

(Important note: The list here only looks at Shikigami who can provide powerful support. For specific lineups, you should examine your opponent's lineup and the situation before you make any decision on which Shikigami to field.)

Vampira
Since Vampira’s ATK would be extremely high when her HP is low, Momo, as the only Shikigami who can set the pace of healing as well as resurrect a teammate, will complement Vampira's HP effect perfectly.
Shuzu
Shuzu shares damage, and this greatly reduces the demand for healing. Momo's healing ability also reduces the stress of treatment for the whole team. The trio comprising of Momo, Shuzu, and a Vampira equipped with Scarlet is considered a formidable one.
Zashiki
As both of Momo's active skills require a lot of orbs, an orb supplier like Zashiki will be a powerful ally for Momo.
Ame Onna
A lineup that includes Momo generally needs to survive the fierce offensive launch by the opponent in the first turn, and Ame Onna helps to ensure that the controls on Momo are lifted in time and continue to do so when the team is up against a control Shikigami. This will ensure that healing and resurrection will be carried out in time.

Warrior Soul
The skill of Warrior Soul is the nightmare of all healing Shikigami. The reduced treatment skill can easily cause the team members to excessively low HP.
Enma
Momo will find it extremely tough to handle Enma's hard control skills, Silence and Morph. It is grueling for a lineup with Momo to challenge an enemy with thrusters and Enma. It's almost impossible to break free of the control to resurrect.
Hououga
As Momo rarely equipped with Effect Res soul, the role of resisting control is handed over to Ame Onna in her team. But Hououga's control is something that Ame Onna cannot dispel. A Momo that cannot act is completely useless.

Lord Arakawa
Momo's resurrection ability prevents Lord Arakawa (who aims to reduce the enemy's numbers by instakilling enemy members) from attaining his goal. On top of that, Momo gives her own teammates more opportunities to carry out their own counter-attacks which would bring about a threat to Lord Arakawa.
Hakuro
Hakuro is similar to Lord Arakawa, but the difference is that Lord Arakawa has a chance to kill and gain an upper hand when up against the Shuzu-Vampira-Momo trio, but Hakuro's attacks will be almost completely subdued by Momo.

Comparison with the same type of Shikigami

Kusa
As an R-card, Kusa is easy to get, and her skills can be leveled up to stack fully with minimum difficulty. At the same time, Kusa's healing is tied to her ATK, so her output is supported as well. Hence, she is highly sought after in all kinds of PvE battles in the early stages of the game. However, Kusa's disadvantage is that as her healing capacity is related to her ATK. Many players opt for souls with ATK bonus and compromise on Kusa's own HP, causing her HP to be relatively low, making her an easy to preferred target for concentrated attacks by the opponent. Moreover, Kusa is unable to treat her teammates in time when she is being controlled.
Ebisu
For Ebisu, as long as he can put out the Carp Banner, he will be immensely useful. even when he is being controlled, the Carp Banner can still continue to heal teammates when they act. When in action, the Carp banner can also dispel two debuffs, allowing the team to move out of a disadvantaged position. At the same time, Ebisu's ability to generate orbs could offer a boon to the team. As players and their Shikigami gain maturity and skills, the need for a Shikigami like Ebisu in PvP who consume less orbs becomes pertinent. Ebisu's main disadvantage stems from the reality that the Carp Banner can only heal the teammate when it is the teammate's turn. This means that teammates with lower SPD and HP may not receive adequate protection.
Momo
As Momo is readily attainable by gathering Shikigami shards or using the Shikigami Challenge Passes. Since after each successful challenge, there is a chance to play the Shard Zone challenge using your AP and the Shard Zone can be shared with your friends to get even more shards, it is much easier to level up Momo's skills as compared to other SR Shikigami. Momo's two active skills can transform part of the healing into a group recovery mechanism with Crit. Such unique group recovery and powerful resurrection skills enables Momo to stand her own ground when she teams up with Vampira and Shuzu in a counterattack lineup. However, when compared to Ebisu, she is still lacking in features, orbs, and stability.

Retrieved from "https://onmyoji.fandom.com/wiki/Momo_no_Sei?oldid=32078"
Community content is available under CC-BY-SA unless otherwise noted.