According to legends, she was painted by a talented artist. The artist poured all of his passion and energy into painting her.

After she was complete, he spent his days talking to her, willing her come to life. But she stayed on her canvas and never responded to him. After many years, she gained a spirit and climbed down from her canvas, seeking the artist who loved her so.

But by then, he was long dead, having died bitter and alone. 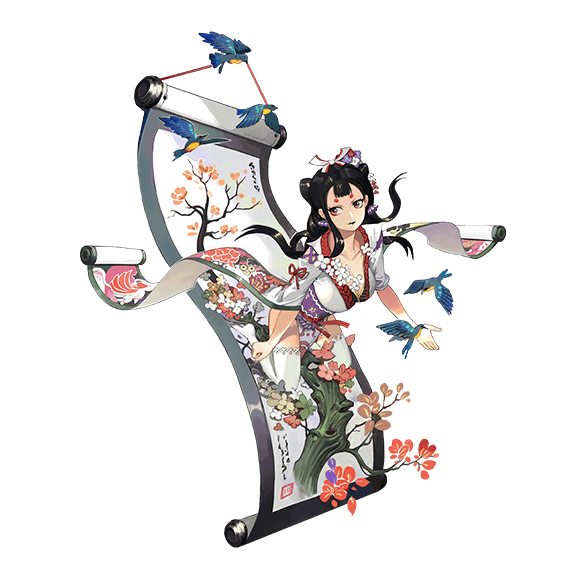 Remember to come back to me!

The world in my paintings is the world inside my heart!

At the end of the turn, Kachou Fuugetsu has a 20% chance of activating the World of the Canvas, increasing her action bar by 20%. Besides this, Kacho Fugetsu has 30% chance to sacrifice a bird to block freeze, daze, sleep, transform, silence, taunt, confuse, and bind skill/mitama effect for ally.

Behold the sweet fragrance of my flowers! 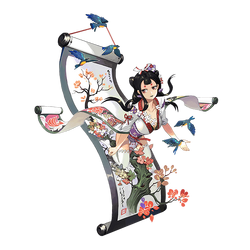 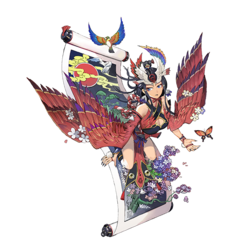 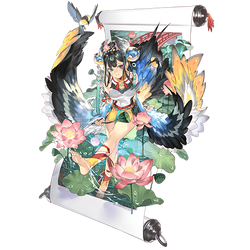 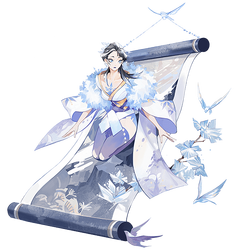 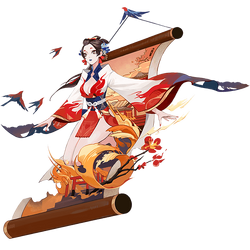 I know you are only a painting, but I just can’t helped being drawn in by your beautiful black hair, your cherry-red lips, and your alluring eyes.
The more I gaze at you, the more uneasy I feel, as if I am imprisoned in your world. The fragrant flowers, the gentle birdsong, the mountains in the distance, and the blue sky.
I hear the river gently flowing, whose water is as glass. A dozen or so fish swim silently beneath the surface, in a world of their own.

I follow the riverbank. Her beautiful voice is accompanied by the melody of the flowing water. The birds sing and flowers adorn the landscape with vivid color. I gaze at her shyly. I smile but dare not speak.
Eventually, the melody fades and the sky darkens. I turn around for a moment. When I look back, she has gone. I feel sadness but not regret. I follow the river in search of her. I cross the mountains and leave the painting to return to the real world.

Looking at the girl in the painting, all you will see is her gentle smile and captivating eyes.
It is often said that illusions stem from the heart. He who is tranquil of heart will see a still lake and silent bamboo. He who harbors fear in his heart will see terrifying spirits and demons.
Everything in the heart is manifested before the eyes. However, all illusions, whether soothing or harrowing, are nothing more than intangible projections.

An all-rounder healing Shikigami with powerful features and capabilities. She can manage both single and group HP recovery with ease. Hana’s excellent healing ability, which requires no orbs, combines with her passive skill, making her a formidable healing Shikigami.

Strengths
Powerful features with a large healing capacity that does not waste orbs.
Weaknesses
No particular shortcoming.
Recommendation
A Shikigami you must promote.
Application
Outstanding performance in all kinds of battles. In PvP, her impressive skills give her a decisive edge over all other healers. In PvE, she delivers above-average performance, whether it is an encounter with a demon, in the Hunt, or battles in the Secret Zone.
Features
Her passive skill can automatically thrust herself forward, and she can resist control attempts. The self-thrust, plus a normal healing skill that does not consume orbs, help to guarantee the HP level of the team. At the same time, her multi-stage normal healing characteristic makes her a suitable candidate for many souls such as the Seductress for output, the Dawn Fairy for enhanced thrust effect, and even the Mirror Lady, where she can make the opponents counter to inflict damage back onto themselves.

Normal: Loyal Flock
The effect of the Loyal Flock is such that one bird flies back each turn. The flying bird effect is not inherited in counters, so the number of birds will only increase due to the additional turns, such as those triggered by the Soultaker, while counters activated by souls like the Dice Sprite or Scarlet will not produce any impact.
A healing skill that does not consume orbs is very rare. This normal healing skill, coupled with a passive thruster effect, can generate many opportunities to act to guarantee the HP level of her own team, as well as help to leverage her souls for output or control. A highly flexible and formidable normal attack skill.
Passive: Painting Realm
Apart from the self-thrust impact, this also helps Hana's teammates resist control attempts. A truly potent passive skill. This control resistance is similar to Ootengu's shield. It can withstand any conceivable control effect, including hard controls that cannot be dispelled easily, like Morph and Daze.
Active: Fragrant Flowers (3 orbs)
Hana heals all her allies by an amount equivalent to 8% of her maximum HP, and offers them the Nectar effect for 2 subsequent turns where they will receive HP recovery equivalent to 7% and 6% of Hana's maximum HP respectively.
The healing capacity of this active skill is simply dazzling. Be it the size of the group recovery or "hot" mechanism, this is the mother of all active healing skills. The delayed HP recovery helps to maintain a healthy overall HP level over several turns. In addition to this, the "hot" effect can also trigger souls like Pearl to further boost healing effects. As the normal HP recovery effect is already quite considerable, this skill is usually not required except when under extreme HP pressure.

Basically, the main attributes will be the undisputed SPD-HP-Crit combination. Her passive self-thrust effect with a zero-orb normal healing skill means that slot 2 must be SPD. In addition, as crit can bolster her healing capacity, slots 4 and 6 must be HP and Crit respectively. When she carries such souls, a certain amount of output is guaranteed, while she continues to deliver an impressive amount of healing power.

Currently, the main soul suggestions for Hana are Fortune Cat, Seductress, Mirror Lady, and Dawn Fairy. Each of these souls has their own strengths.

The first is Seductress, which performs very well in both PvE and PvP battles. This is because the multi-stage output mechanism allows Seductress to produce a certain amount of output. In the later part of Duels, as the judge heaps on more and more buffs in battle, the superimposed effect generated from the repeated triggering of Seductress can kill the Shikigami if there is no Shuzu to distribute the damage. In addition, the additional output provided by Seductress in PvE battles can also improve the speed of the kills.

Fortune Cat is also a commonly deployed soul. In duels, for a lineup with moderate speed, the Shikigami that supplies orbs is often omitted. With her own thruster skill, and high action frequency, Hana is a natural carrier for a soul like Fortune Cat. With more turns, more orbs, and a skill mechanism that conserves orbs, Hana can make a significant contribution to her team when she carries Fortune Cat.

For Mirror Lady, her main role is to make use of the unique characteristics of Hana's normal skill to attack the counter Shikigami on the opposite side to create counter-damage on opponents in order to crush them. In a Duel against a lineup with counter Shikigami and Shuzu, Hana with Mirror Lady will often deliver an extraordinary performance.

The high adaptability of Hana allows her to play a significant role in many different lineups. Here are some of the more common combinations.

Kamaitachi
A dual thrust lineup with Hana will have both output and healing. To some extent, a Hana equipped with the Dawn Fairy can also help to push the team forward.
Shishio
Shishio comes with his own control rebound while Hana can help to resist control. So, when these two effects are stacked up, Shishio's ability to shake off control becomes even more powerful. In addition, the "hot" effect that Hana has will complement the self-thrust that Shishio has to quickly recover his HP level.
Samurai X
For those who have yet to seize the opportunity to act due to their SPD, Hana's ability to resist the control will give Samurai X the chance to counter and deliver the Taunt to resist the enemy.

As a healing Shikigami, there is no particular Shikigami that Hana can counteract.

Hououga
Although soft control is less restrictive on Hana, once she is dazed, all her functions will temporarily fail.
Enma, Komatsu
Morph is a control that can seal Hana's passive skill, and prevent her from acting so that she cannot release her normal healing skill.

As a top healer, Hana's all-rounder capabilities allow her to hold her ground when up against other healing Shikigami. Be it PvE or PvP, Hana can handle the battles with ease. Even though other healing Shikigami may surpass Hana in certain aspects, there are none that can be compared to Hana, in healing, when it comes to overall features. Hana’s unique feature set also means a permanent seat has been reserved for her in duels, considering that she cannot be easily suppressed by anybody.

Retrieved from "https://onmyoji.fandom.com/wiki/Kachou_Fuugetsu?oldid=36925"
Community content is available under CC-BY-SA unless otherwise noted.