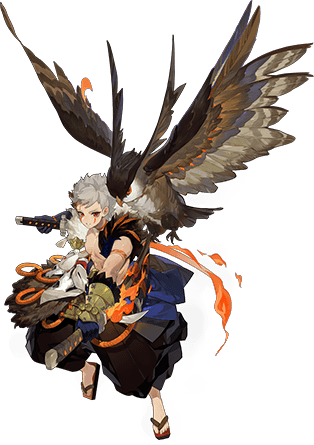 SP Yamakaze attacks a single target twice with each attack dealing damage equal to 40% of his attack.

SP Yamakaze's move bar increases by 30% when a control effect is removed or disappears at the of a turn. His move bar is also increased by 1% (max 90%) for every Action Point Briskey has. When dealing damage, the enemy target will lose 1% of their and SP Yamakaze's damage will increase by 0.5%.

Briskey (迅風)
When SP Yamakaze is not inflicting with a control effect, the owl Briskey can use the skills Shelter, Huntering Eyes and Sky Attack once at the start of his turn.
When SP Yamakaze uses Swift or Storm, Briskey acts accordantly.
(Action Points are represented by a yellow bar under Briskey's skills.)

Briskey grants an ally an unmoveable

shield that can absorb 80% of SP Yamakaze's attack. Lasts for 2 turns.

stares at the selected target and decreases their attack, defense and speed by 35%. Lasts for 2 turns.

Briskey approaches a selected target and

blows them away. When blown away, their souls and passive are

sealed. When the enemy lands, they receive damage equal to 240% of SP Yamakaze's attack.
Monsters cannot be blown away, however, damage dealt to them will be increased by 480%.

SP Yamakaze attacks a single target 4 times with each attack dealing damage equal to 63% of his attack. 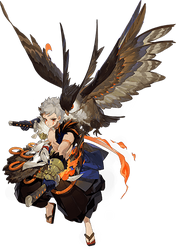 Retrieved from "https://onmyoji.fandom.com/wiki/Hatsurei_Yamakaze?oldid=35806"
Community content is available under CC-BY-SA unless otherwise noted.