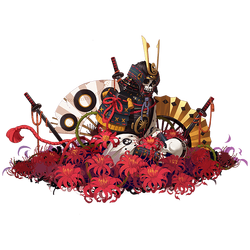 Once Gashadokuro, also known as Odokuro, is discovered there will be 3-5 minutes of gathering for everyone to prepare for battle, as after it begins, no one new can join. There is a minimum of 50 and a maximum of 300 people per boss. The difficulty of the battle is matched with the number of people participating, and low-level players will not increase the difficulty. The boss stays for 20 minutes and escapes after that if players fail to defeat it.

There are 3 stages to the boss battle itself.

Note: Skeleton Soldiers' health bars are not shared across players, and they are immune to control skills.

For more information on the truth and lies, see Gashadokuro/Messages

When Gashadokuro's health drops below 50%, a multitude of skeletons are summoned and Gashadokuro becomes invincible. Skeletons will leave messages and players must discern the truthfulness of these statements. The 2 skeletons saying the truth must be defeated to make all skeletons disappear and for the boss to lose invincibility.

If the wrong skeleton is defeated, Gashadokuro will release a counterattack.

A yokai by the Sanzu River, a massive skeletal soldier, loyalaly protecting Higanbana. Perhaps she was moved by his loyalty, but Higanbana, who never trusts others, would sleep underneath his armour on cold nights.

Poison deals damage equal to 33% of Gashdokuro's attack at the end of turn and heal down reduces the effect of healing by 50%.
Confuse

Confused targets might use their normal attack to attack a random enemy or ally when they move.

Gashadokuro launches a 2-hit strike on all enemies, dealing damage equal to 150% of his attack with the first hit and 75% of his attack. Also has a 75% chance to inflict

Gashadokuro attacks all enemies dealing damage equal to 150% of his attack and had a 20% chance to inflict daze.

Gashadokuro summons his soldiers and increases his own

During stages 1 and 3, damage received is reduced.

Gashadokuro attacks all enemies dealing damage equal to 100% of his attack.

Have you ever drank bone soup? On the battlefield I could drink and eat anything. Only then would one survive. When I forced them to drink, one of them actually started crying.
He said, "General, he, he died for our sake, how could we...... we......"
"......Stop it with the nonsense, if you want to live then finish drinking." I discovered that I've become incapable of crying since long ago. To me, the battlefield will be my grave.
......But you brats have to return alive.

......How could such a beautiful woman appear on the battlefield......
The moment she appeared, I knew, she was definitely not human. I stared unblinkingly at her, but she was not bashful at all, instead lightly laughing. I lost all power to speak, and could only gaze on, her red eyes blazed like flames.
She probably thought that I looked very foolish, and raised her chin to smilingly say, "Lechs won't live long you know?"
I finally recovered, and suddenly thought of an idea. I slowly said, "......Can you help my soldiers escape from here alive? My life is yours!"

When I set foot into the higanbana flower sea by the Sanzu River, it's as if I sank into a mire of flowers - the flowers wrapped around me one by one, and vines from deep within the bushes reached out to bind me.
I realised that those flowers were alive, they want to drag me into the abyss! That woman laughed, and asked me if it was terrifying.
"Not at all." That was the last sentence I said to her before losing consciousness.
At least, my soldiers are still alive.

The battlefield is scattered with the fragments of handwriting from many soldiers.
These worn-out slips of paper have been trampled by horses, buried in mud, dampened with rain...... the majority of the words written on them are no longer discernible, leaving only some bits and pieces.

How many days has it been marching at night in the rain......
A lot of people are so tired that they can't go on anymore, the march became slower with each day. And there's endless coughing coming from the group of people...... if this continues, everyone will collapse! I thought this, and took courage to enter the general's tent, trying to persuade him to stop and have a few days' rest. But the general ejected me from the tent! He doesn't care about our survival at all! If he could be so cruel, then I won't work myself to death for him either! I want to go home, that's right, I'll desert in the chaos......!

There was actually meat in the soup today. I was just marvelling, as I saw the general hoisting a couple of soldiers by the ear and walking out of the barracks. The general roared, "What kind of time is this, to dare run out to hunt rabbits! Do you not want to live just for a few mouthfuls of meat, brat!" Everyone burst into long-awaited laughter. The soldiers also smiled apologetically and said, "General, look, everyone now has rabbit soup...... we'll all so tired, let everyone rest for a day......" So this is rabbit...... So savoury, but these bones are pretty big......

Noone thought that the enemies would prepare an ambush here.
When I woke from my dreams, and saw the hail of arrows, I still thought I was dreaming...... looking at the shocked people around me, I suppose everyone would be the same...... luckily, the general is here, with one command, everyone recovered their wits, rapidly packing materials to run. The general decisively burned down the remaining barracks, the sea of fire barred the way of the enemies, and we were able to survive...... the angered voice of the general came from behind, "I already told you, stopping to rest is guaranteed death, you lot of trash...... now you know to run! Run run run, get running all of you!"